March 31, 2009
This might be a scattered post....if you have read this long or have known me for any length of time, this should not be anything out of the ordinary!

First of all, I don't normally watch commercials because of the invention of the DVR (which I love and totally missed while in the hospital) but I do catch some occasionally. I HATE this commercial...

I understand that the commercial is supposed to be cute because the little girl is sassy but I think she is completely disrespectful and if my child ever talks to me that way she won't eat!!! Okay, maybe that's a little drastic, but really....does anyone else agree???!!! The commercial just bothers me...a lot!

Totally LOVED Grey's Anatomy last week...I know I am a little late on this. I have been watching the show and sometimes I am disgusted with it but I really liked it last week....good quality television for once!

I am really into Amazing Race this season. It all started when I was in the hospital and it came on one Sunday night...I was hooked. Brice and I used to watch it a couple of seasons ago but kinda got away from it. Well, I am all about it now. I think I like the mother son duo...the boy that is deaf. I kinda like Tammy and her brother too (names aren't coming to me) but they are kinda ruthless. Anyway, love it!

American Idol...my favorite is Danny Gokey. Adam is creepy and weird but talented...gotta give him that. I think that Megan did HORRIBLE last week and she is just awkward. Kris Allen...I like him and he is from Conway, Arkansas!!! GO ARKANSAS GO!!!! I went to college in Conway...lived there for 5 years! I SO don't get all the hype about Matt...I don't like him...AT ALL!

We pretty much still just hang out at home. I did venture out yesterday with Lauren to go to her 2 week checkup. She weighed 9 lbs, 5.5 oz and was 22 inches long!! She still isn't up to her birth weight of 9 lbs, 9 oz yet but the doctor said bigger babies take a little longer sometimes and she wasn't concerned. She was .75 inches longer than at birth though!! She is 95th %tile for length!!! She is long...I knew that already...I had those feet in my ribs for awhile!!! =)

I took the girls walking yesterday around the block in the double stroller...first time using it. Rachel LOVED it and Lauren could have cared less...she snoozed the entire time! 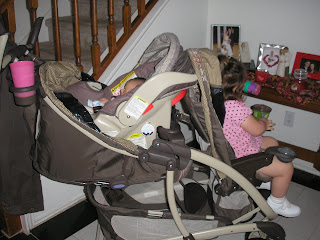 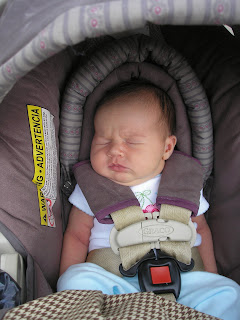 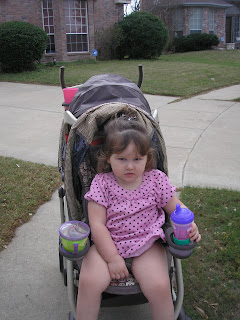 That's about it. Still working on Lauren's birth story and I am going to post something later regarding a new thing at the hospital that I have an opinion about....later!