October 25, 2009
We arrived in Orlando on Saturday and then just stayed in our condo that night and watched Arkansas almost beat Florida....too bad almost doesn't count in football! But, it was a good game.

Rachel on the airplane.... 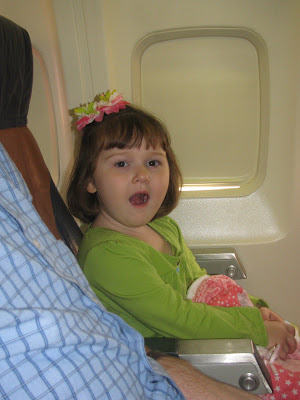 Sunday morning, we got up early and went to Magic Kingdom for breakfast with the Pooh characters at Crystal Palace. Rachel wasn't too sure about the characters at first but then she warmed up to them. When they first tried to come up to her, she was literally shaking with fear. It was FREEZING outside...okay, not literally but it was very cold...especially for Florida...I had to buy a sweatshirt. 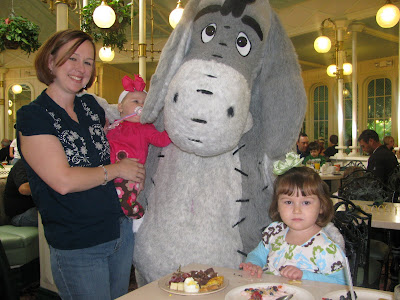 We spent most of that day at Magic Kingdom but ended the day at EPCOT. We had a great day. I could not believe the weather was so nice...after the initial time of being really cold in the morning. We had reservations at Coral Reef restaurant for a LATE lunch (almost dinner time) and Rachel liked eating where she could see the fish swimming around in the aquarium. I think she loved the shark the most...as long as he was far away and behind glass!

Rachel's favorite attraction was...hands down...the carousel!! She refers to it as "the horsies." She also rode Dumbo flying elephants, It's A Small World, Snow White and Peter Pan (although I don't think that was Sunday, I think it was later in the week).

One of the things that was so great about this trip is that really all we paid for was food, souvenirs, and a rental car. We used rapid rewards to get our flights, we stayed in a condo courtesy of Brice's parents' time share, and when we went back in 06, we bought a 10 day park hopper ticket with no expiration date and we had 5 days left! We loved our condo and it was just a great experience!

There are more pictures on the posts coming....

Rachel Moss said…
We went to Disney World the summer after my 6th grade year. My little sister hated any costumed character, so she faked a stomach ache to get out of the character breakfast!
I'm glad Rachel was able to warm up to the characters!
October 27, 2009 at 10:37 AM