August 13, 2009
So, I have several days and things to catch up on from blogging. On that list is: Chelsea's birthday party, playing at Uptown Village, Rachel's (and Lauren's) first movie experience, and Lauren's 5 month pictures but there is something that I must blog about first.

So, it is no surprise that my 2 year old is a little challenging...she is 2 and as some would say, she IS my child! All joking aside, I feel like her behavior problems are really becoming a problem. What do you do when your friends try to have play group and you are afraid to take your child because you are afraid that she will hurt one of the other ones or get so out of control that I will not be able to handle her and my infant at the same time???!! It is frustrating! It has really gotten to the point that I don't like taking her to church. A couple of weeks ago, she got a bloody nose (the other boy had a knot on his head) <~I actually think this was an accident, but still....last night she took a toy away from a baby and made her fall over and bloody her mouth. At Sandy Lake, we had everything but a "knock-down-drag-out" because she wasn't getting her way. This became a little dangerous because it was water and I had Lauren in the water at the same time. Two nights ago she was screaming at the top of her lungs because she wanted me to put her to bed instead of her daddy when I was on the phone doing Premier stuff....I was with her all day long...this was simply because it was not HER idea for Daddy to put her to bed, she wanted me.

I am reading "The New Strong-Willed Child" by Dr. Dobson. I really like it but there is a part of me that doesn't really feel like she is that childthat they speak of in the book because she isn't THAT bad. He talks a lot about how "The Strong-Willed Child" is that way from birth and Rachel WAS NOT! She was the easiest, most laid back baby...both of my babies are. I find Lauren to even be a little more high-strung than Rachel but she is still a GREAT baby!

It is really a power struggle. That is what I feel the issue is. She had a major digression in potty training a couple of weeks ago and I was on her like CRAZY for 2 days about it...she was having accidents every 20-30 minutes and NOT going in the potty at all. I spanked her. I took toys away. I praised her when she did go. I tried to tell her about rewards that are to come if she DOES go in the potty. I limited her TV watching. I did everything I knew to do and NOTHING was phasing her. NOTHING. I was at the point where I was really starting not to like my child because in my frustration I found myself taking it personally. After talking to a few wise friends of mine who have "been there, done that" I was advised to just leave it alone. I did. The very next day, she was back on track. We still have 1 accident or so a day but it truly is an accident and not an act of defiance as it was before. I gave up the power struggle and she decided she could go in the potty. Does that mean she won? Maybe. But how in the world to do you control potty training? YOU CAN'T!! It is up to them and she figured that out. I said she was strong-willed, not dumb! She is very smart and I think that is part of the problem.

So...as I sometimes feel like a failure, I know that praying is the only thing that is going to get this Mommy through raising this child. I love her with everything in my body but she is hard. She just is hard.

I am convinced that someone somewhere has prayed that God give me patience (yeah, thanks whoever you are) because that is what I am being taught through this precious child that He has given me. Bless her heart!!

Please pray for me (enough on the patience stuff, though, really)! I want to love her like she needs to be loved. I want to be the best parent that she can have but it will take lots and lots of prayer. 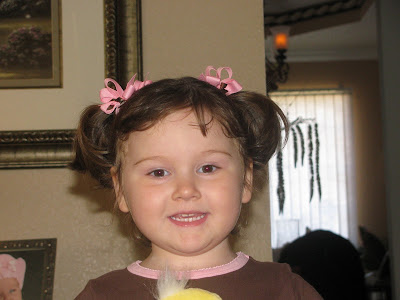