August 15, 2009
Well, basically in this post, I am going to try to cover everything I need to cover from the past few weeks! So...it will be long.

CHELSEA'S BIRTHDAY PARTY!
Rachel's best little friend is now 3 years old!! Chelsea had the best little birthday party at a small toddler-sized water park in Arlington. It was so cute and Rachel had a blast going under the water...her new favorite thing! She went down the slides by herself and everything. Chelsea's party was Ariel-themed and she had cute little cupcakes for the kids and cake for the adults. We got her a pretty little black/white dress with matching bow, a cup with her name on it, and some princess books. A good time was had by all!! Happy Birthday to Chelsea Joy! 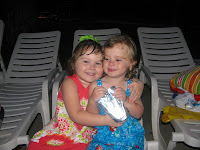 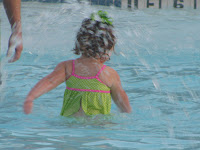 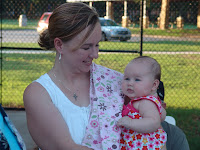 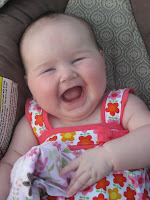 UPTOWN VILLAGE
I have discovered a city nearby...well, I have known it was there for a long time but I just now discovered all of the cool things that they have there!!! So...a friend told me about a little splash area for kiddos that is free so we decided to check it out one Sunday evening since we don't do anything church-wise during the summer. Here are some pictures from then.... 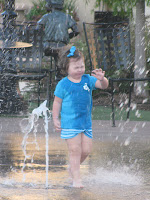 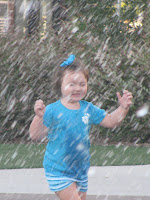 STUDIO MOVIE GRILL ~ THE GIRLS' FIRST MOVIE!
Heather found that for $1 for kids and $2 for adults, we could go see the movie Prince of Egypt during toddler movie time at Studio Movie Grill. I was very excited!! A group of us went as a playdate last week and it was a lot fun...chaotic, but fun! We ordered lunch and ate in the dark as we watched the movie. Rachel went to the potty about 5 or 6 times the time that we were there but Kaydi (who was 39 weeks pregnant and actually had the baby later that day) had to go frequently too so she took her most of the times! I asked Rachel afterward if she liked it and she said, "No, it made a really loud noise and it scared me!" She's such a drama queen! I took a few pictures... 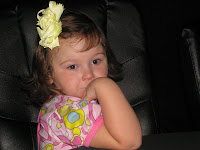 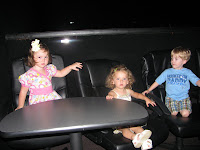 I need to post Lauren's 5 month pictures but I will do that tomorrow or sometime this week, I am sure!!!