November 29, 2008
This day started REALLY early for me! I got up at 3:15 and went to Kohl's and got there about 5 minutes after they opened at 4:00. It was CRAZY!!!! I couldn't find the cookware set I was looking for and really was too tired and overwhelmed to think about it. I got what I needed and got in the line...it wound all the way around back by housewares! I got in line at 5 til 5:00 and I finally checked out and was in my car at 6:25. It was NUTS! I had seriously thought about going home after that but I was on a mission. It was still dark outside and my family was probably still in bed. So, I headed to Arlington because I needed to go to Hobby Lobby and I was hungry! I stopped at Bed, Bath and Beyond because they opened at 6:00. It was pleasant! No crazy people! It was nice. I got most of my shopping done there. I still needed to go to Hobby Lobby for a gift for my brothers. I went by Chick Fil A and then headed to Hobby Lobby with 15 minutes before they opened. I sat in the car and finished my breakfast and went in the store...it too, was pleasant! I was thankful. After Hobby Lobby, swung by Mardel for a few gifts and then home. I was home by 8:45 an EXHAUSTED!!! I decided that it would have been a little easier carrying all of the stuff in Kohl's and standing in line for an hour and a half if I weren't almost 6 months pregnant! I was achy all over after it was all said and done.

I came home and took a nap until lunch time. I was still kinda drained the rest of the day but after Rachel's nap, we put up her little 4 1/2 inch Christmas tree in the playroom. She was so excited! We figured that having her own tree would deter her from messing with the big one...we will see! Here are some pictures! Isn't she a doll? 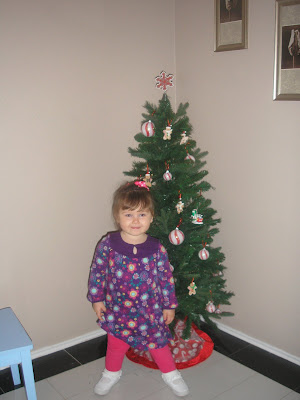 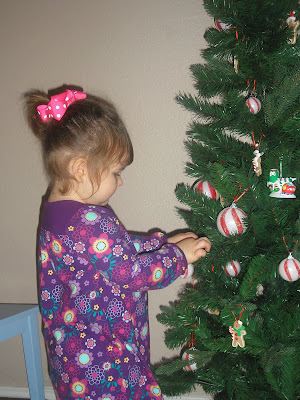 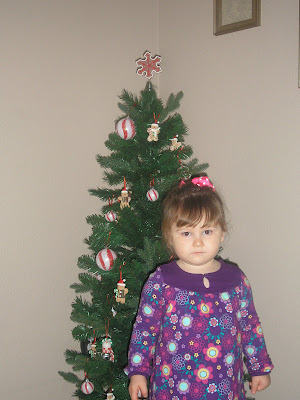 Lainey-Paney said…
I did Kohl's last year. Never again. Unpleasant, the line is freakin' crazy. No, no, no.

This year: up & at Old Navy for the doors to open at 5. Outta there & over to Target for the doors to open at 6. Done.
After that: Starbucks for some java, Home Depot (which was THE most pleasant experience of all!), Tuesday Morning, and a local dollar store.
I was home just after 11am. When Gage went down for his nap, I went to Garden Ridge. I could seriously LIVE in Garden Ridge. It's my new favorite place.
December 2, 2008 at 10:05 AM