We love this thing!!! We have played with it yesterday and today and Rachel LOVES it! She only gets minimally dirty. We contemplated getting the large red crab sandbox for her to sit in (that holds 6 bags of sand!!!) and Brice thought the table would be better for cleanliness as well as interaction from us. He was right. We can play with her and we only get sand/water on our hands. It isn't a messy thing at all. She enjoys moving the water to the sand to make castles and then the sand to the water...I guess just to make it dirty. We love the umbrella that is attached because it keeps the sun off of her for the most part. The table comes with accessories and it only holds 1 bag of 50 lb sand. We like it so far. It was also super easy to put together!!

It has been a few days since I have posted about breastfeeding so it is time again....I just cant get the hang of it...I want to say that I am a pro at 6 weeks but...I'm not!! I bought two books from Amazon.com about breastfeeding. One is great and the other one gets on my nerves. OH...and the term "Baby Friendly" that I blogged about previously was not coined by my hospital system. The book that I don't like refers to this terminology as well! I was happy to know that something so idiotic didn't come from the establishment that I work for (although I am not fond of the idea that they still support this) but I was surprised to know that it was more widely known. Here is the main reason (so far...I just them yesterday) why I like the one book and not so much the other. One of the books talks all about one physician's opinions on how babies should be breastfed and he basically says that anyone that does not agree with him is incompetent and should not be giving advice to breastfeeding mothers. He says if your nipples hurt then you aren't latching on correctly. He doesn't go into details on how to help a mother latch on correctly...basically says to go see a lactation consultant (that, of course, believes as he does). The other book gave specific step by step instructions on what to look for and what to do to make a latch more comfortable and efficient. I was able, after weeks of wrong latching, to get Lauren to FINALLY latch on correctly. She latches great on one side but the other side (coincidentally the side that always has more milk) she has the HARDEST time latching. I am not sure if the problem is me because I am having to manuveur her with my left hand or what the deal is but that nipple is cracked, has bled on occasion and just continues to get reinjured...it hurts! That's also the side that I got mastitis in. ANYWAY, hopefully with this book, we can continue a good latch and I will start to heal. One of the things that is consistent in both books that concerns me a little is the issue of pooping...yes, I am back to that again!!!! =) Lauren only poops about 2 times a week....that is actually an improvement. When we first came home, it was once a week. She passed meconium fine in the hospital and has plenty wet diapers but the books say that if baby has less than 1 poopy diaper PER DAY that it is evidence that they aren't getting enough high calorie milk. Well, I talked to the pedi about it at our 2 week appointment and she said that it is normal for BF babies to only go once or twice a week because most of the milk gets absorbed and it was okay since she was gaining weight. At her 2 week appointment, she still was not back to her birth weight but the doctor wasn't concerned about that either because she said that larger babies at birth sometimes have a harder time regaining all of their weight. She only weight 9 lbs, 5 oz at her 2 week checkup. A week later, she was 10 lbs even and then another week after that she was 10 lbs, 7.5 oz so she obviously is gaining weight. I am anxious to see what she weighs now. I think she is doing fine but reading stuff like that makes me fear that she isn't getting enough milk. It is possible that she, like Rachel, inherited her mother's digestive system and will always have problems....I am perfectly healthy except for my GI problems....sorry, girls!

Here are some pictures from yesterday.... 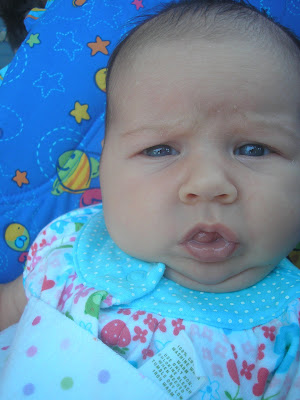 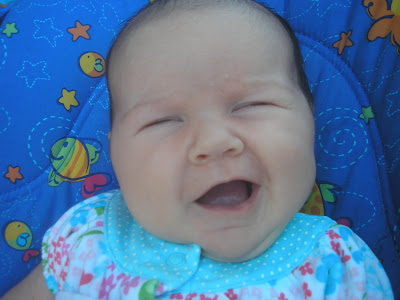 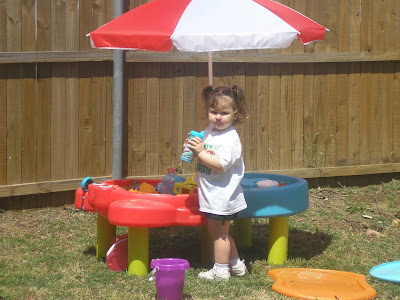 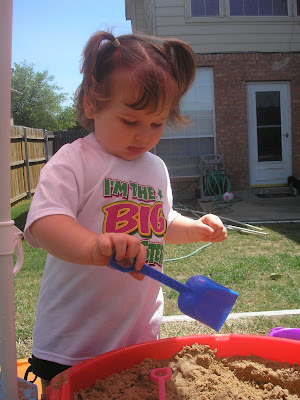 The Outlaw Family said…
My firstborn had the same breastfeed/ poop problem. She went ONCE a week, and OH you better be home when it was time. I was always so worried, but the dr never seemed too concerned. Didnt seem right to be putting stuff in every3 hours, and nothing ever coming out :) Sometimes they said I could induce it with Vaseline and a q-tip. (gross, but sometimes would stimulate things) She finally became normal when she started eating reg food.
April 25, 2009 at 12:33 PM

Jen and Jared said…
I wish I had some good advice or anything about the breastfeeding. I had a lot of trouble with Laila and breastfeeding so we quit around 7 months. She is still really weird about taking a bottle. I really think that each baby is different and there is a different "normal" for each baby. However, I would definitely say trust your instincts about her poo situation and her feeding situation... the doc may say no big deal but Moms always know best. :)

And it is crazy how we do have very similar situations. I see you guys are Hog fans... did you go to U of A? Are you from Arkansas?

About you going back to work... I will be praying for you guys. Your husband will do fine... he will have to because Mom isn't there to take care of everything. :) It won't make you worry any less though. I will be praying... and it will be so nice for your girls to have that bonding time with their daddy.

Anonymous said…
Well she looks great. Both girls do! Sorry to hear about the soreness...ugh! You probably are already using it, but Lansinoh (sp?) Lanolin is a life saver. I smeared on a big blob on each nipple after each feeding and it really can help to keep the cracks at bay. And it is safe for baby so you don't have to wash it off or anything when you nurse. It just might get on your shirt or bra or breast pads. My Mom always said that you needed to be growing a third arm during those 9 months of pregnancy...I know nursing early on was a time I really could have used one!!
April 26, 2009 at 9:11 PM

Teresa @ Grammy Girlfriend said…
I tagged you on Teresas Treasure's this morning. It's called 8 Things and is an easy and fun way to get to know other bloggers. No pressure. Have a great week.
April 27, 2009 at 1:02 PM

Dana said…
Love the pictures. The sand and water table looks soooo fun. I wish the boys were younger, they would have loved it - They are TOO cool for anything these days!
April 28, 2009 at 10:46 AM