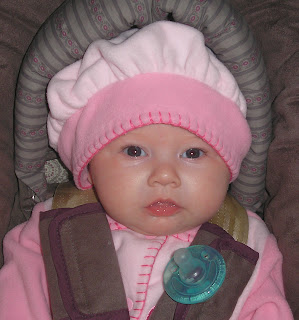 Just got back from the doctor and Rachel just has a cold. She did a flu test and it was negative. Her temperture was 100.5 and the doctor said that if it got above 103 or she was still running fever on Thursday, to give her a call back. I am giving her Tylenol and vapor baths for now. She weighed 14 pounds, 2 ounces!!! I asked about giving her something more than just her formula and she said no. She wants to hold her off at least 2 more weeks. She did say that I could give her about 2 ounces of water between feedings if I wanted. We'll try that! Our next appointment isn't until March 20th.

Jana said…
Hey, Rikki! I saw the pictures on the blog! she is precious! she looks like both of you! Too cute!!