I know many of you have been waiting for this and I am so sorry it has taken me so long to post!!!  This will be the overall post and then I will break it down into "days" for you.

First of all, I hope that it doesn't seem "all over the place" because I don't have the information real organized in my head.  We left for Disney World on Saturday, November 23rd which was the Saturday before Thanksgiving and we were gone for 7 complete days, returning on Saturday, November 30th.  We only took Rachel and Lauren while Hannah stayed with Brice's parents at our house.  We just wanted to enjoy the trip without having a 2 year old and knew that Hannah really wouldn't remember or enjoy it as much as the older two and...we WILL be back again soon anyway! :)

So, our strategy is always to leave at a decent time in the morning but not TOO early.  We chose to fly on American this time because we did not have a layover and the flights were actually cheaper than any others we looked at.  I believe they got us into Orlando around 3:00 in the afternoon.  We just ate snack-y type food on the plane and we had breakfast that morning. 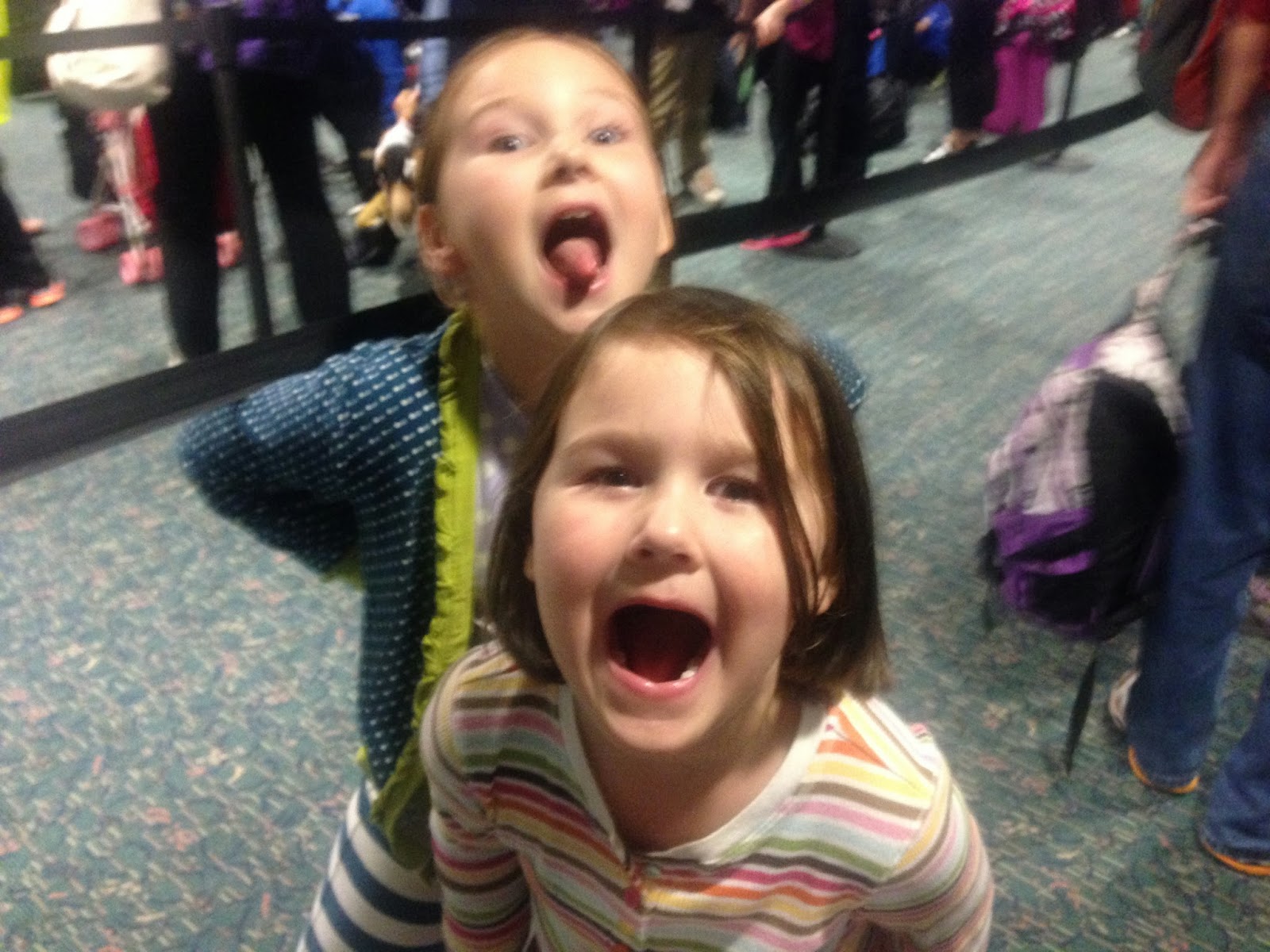 At the airport in Orlando waiting for Disney's Magical Express

When we left Dallas it was 30-something degrees and when we arrived in Orlando it was a sunny almost 80 degrees!  We were happy to be going to that climate! :)  When we got to the airport, I loved how Disney had it's own little area in the airport.  You tell them you are going to Disney and they whisk you off into a separate area.  We had to wait for about 30 minutes in line to get onto the Disney Magical Express but I still say it is SO worth it.  If you don't know what Disney Magical Express is....it is a coach bus that takes you to your airport.  When you depart your original airport, you don't see your luggage again until you get to your room!  It is glorious!  Disney gets your luggage from the airport, takes it to your hotel, and takes it to your room!  The bus takes you to your hotel and you check in then you go to whatever park you want to go to or your room, WHATEVER you want to do. To me, it is just the way to do it.  The main catch is, you have to stay on Disney property (but I think that is best way to do it too...more on that later).

We stayed at the newest Disney resort this time - Art of Animation.  It is a value resort.  Disney has three level of resorts - value, moderate, and deluxe.  We looked and researched and honestly, I wanted to stay in a nicer resort but just did not see the point.  We weren't going to be in the room much and for the cost it just did not seem worth it!  This resort was FANTASTIC!!!  We LOVED IT!! 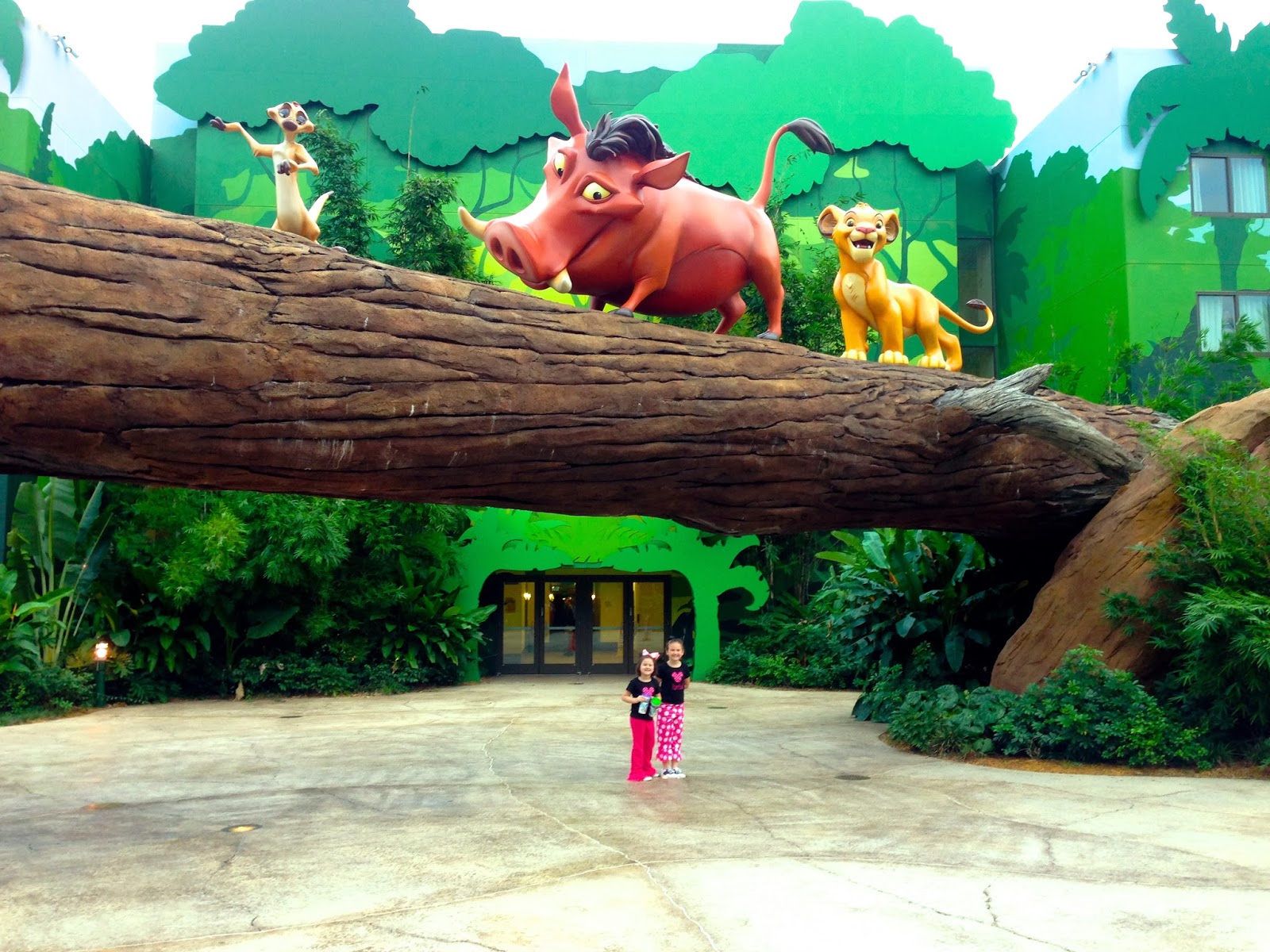 Right outside our hotel 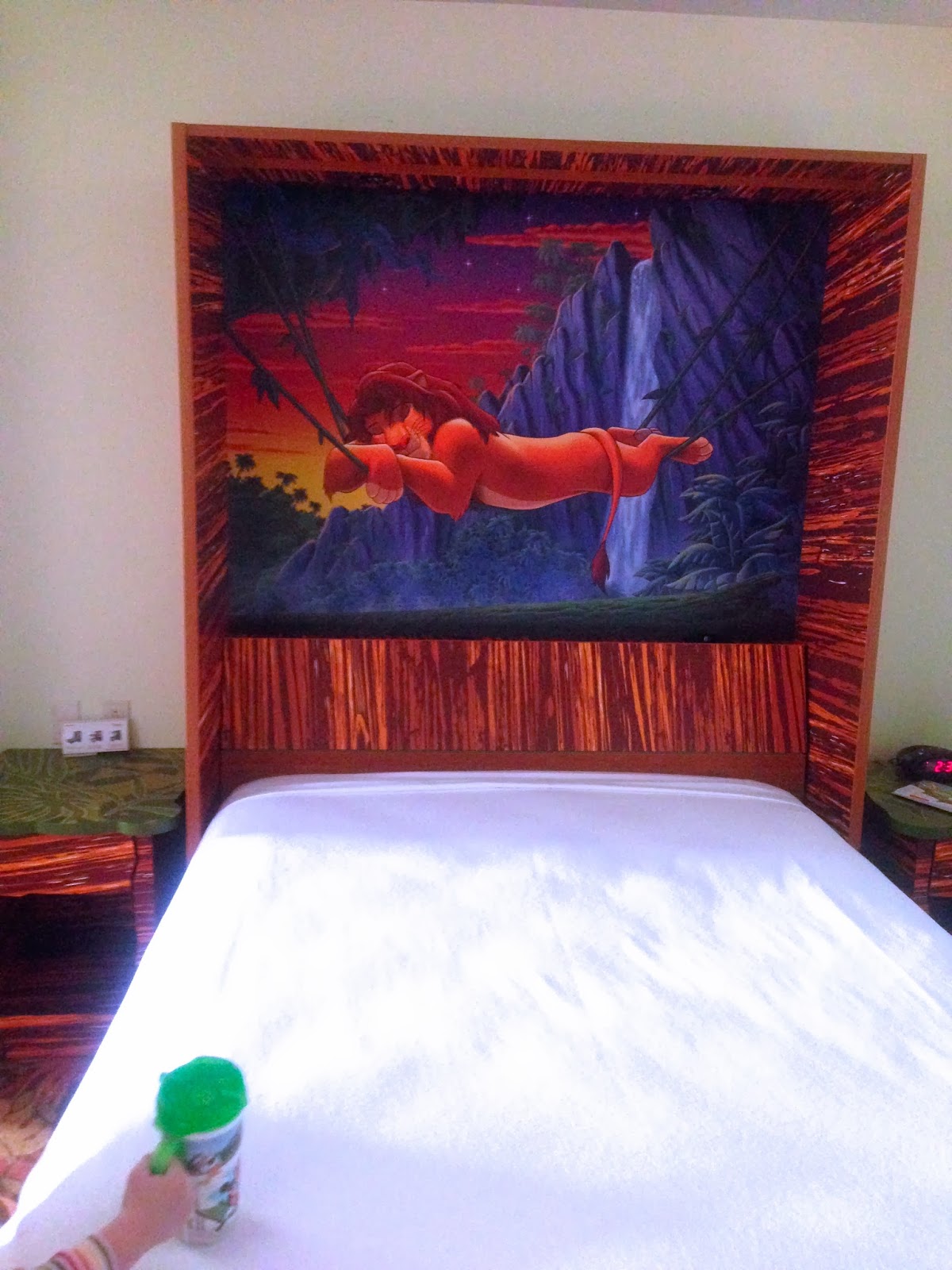 This was the girls' bed that folded out into a table.

It had regular rooms and it had suites.  We chose a suite and we stayed in a room that was themed like the Lion King.  It had rooms themed like Little Mermaid, Lion King, Finding Nemo, and Cars.  When I booked ours, the only ones available were Lion King and Cars but honestly, after being there I think we got a good spot because Finding Nemo and Little Mermaid were RIGHT beside the pool and I think would have been noisy.  The lobby was decorated so neat! 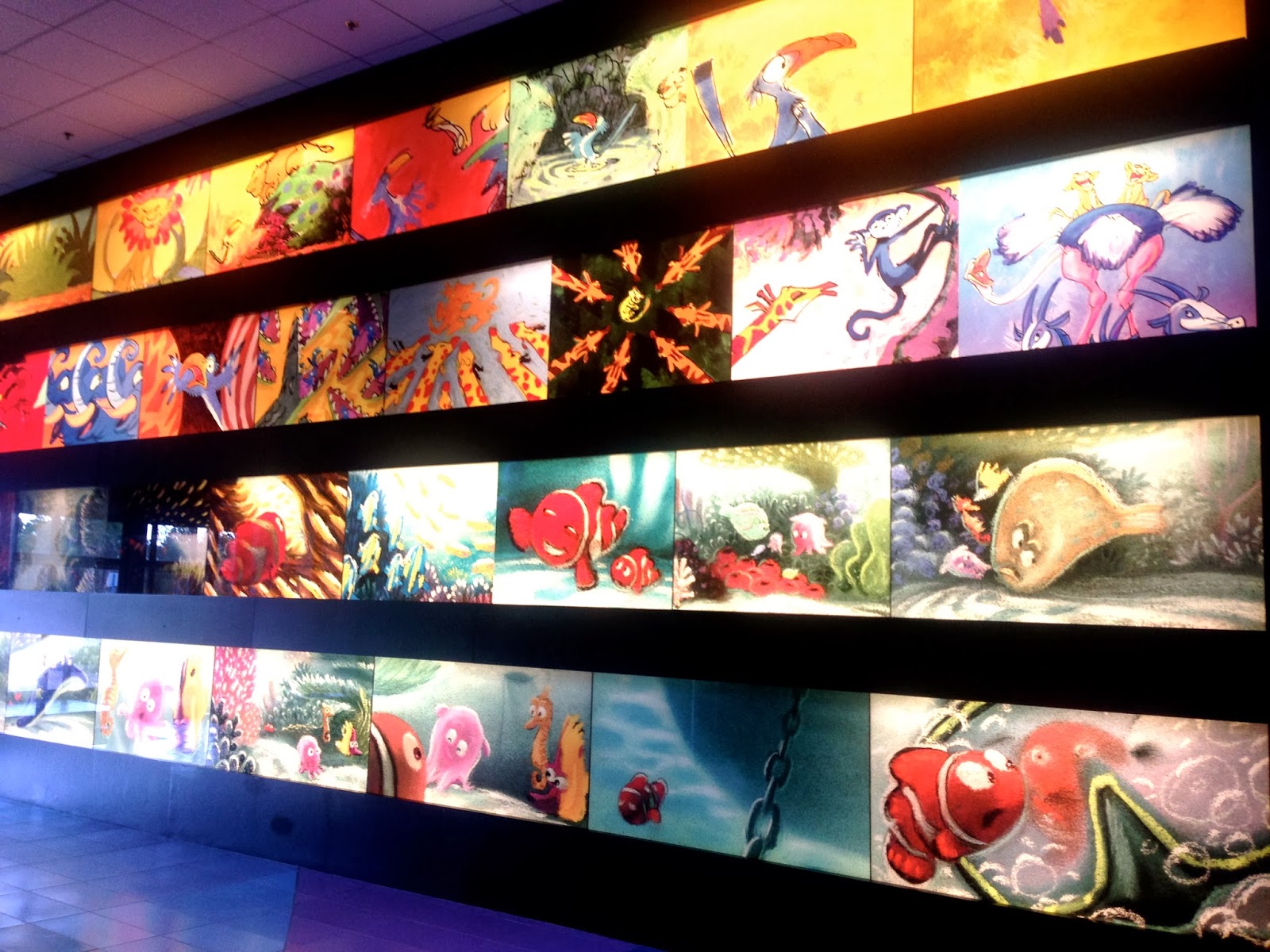 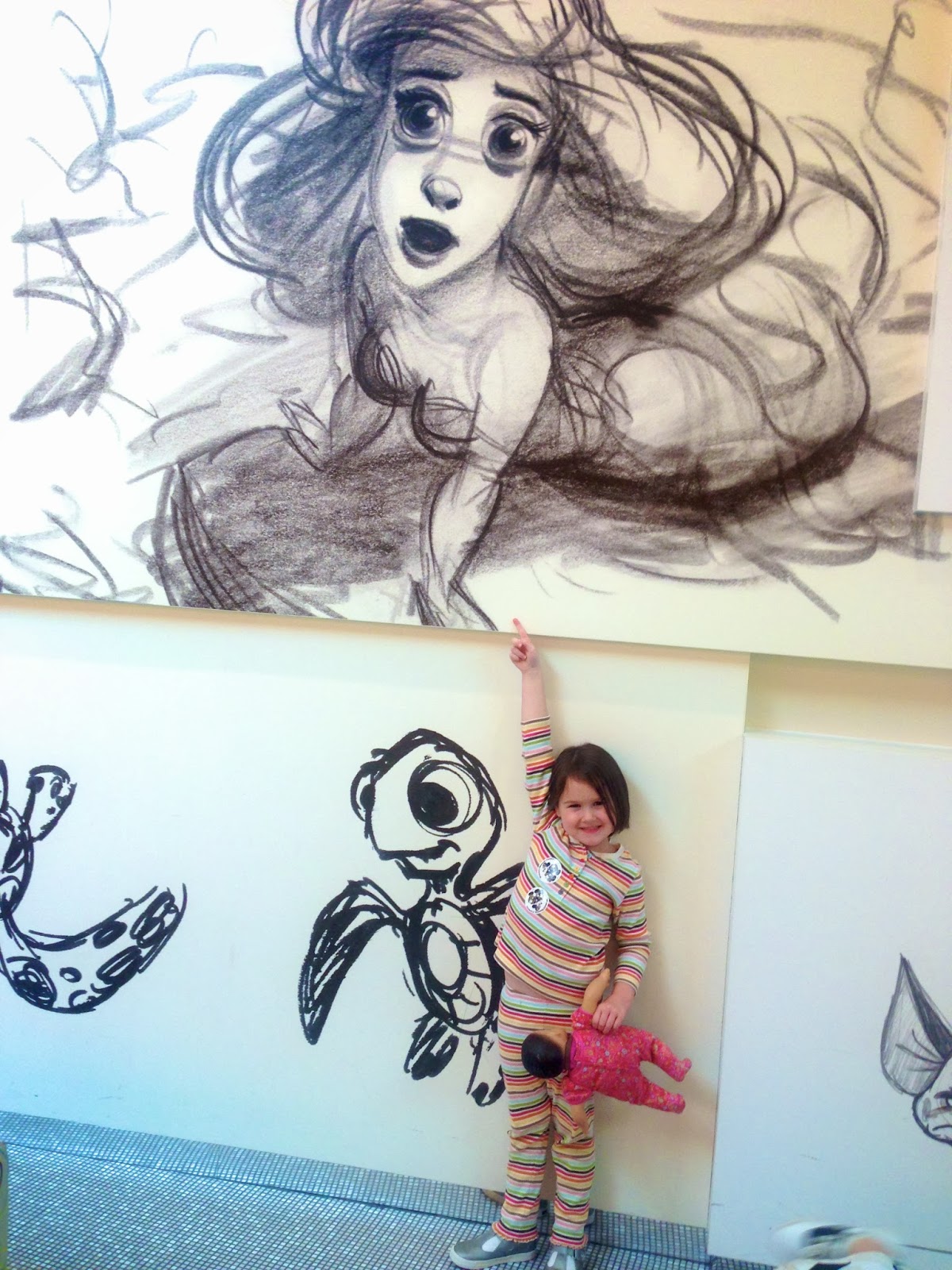 The girls just loved staying at this resort.  And about staying on property vs off property.  We have done both.  I just prefer staying on property.  You don't have a rent a car and you can take the buses to and from the parks...highly recommended...especially if you have adults kids that need mid-day naps.  Plus, the hotels are just...well, they are Disney, what more can I say? :)

We did the Disney Dining Plan this time for the first time an we were really impressed...and FULL!!  I will have to post more about that later but you have to be smart about choosing the right plan.  We chose the basic one where it seemed that they did not charge you for a table service every meal because we knew were not going to eat table service every meal and we did not want to lose money.  We got 2 meals per person, per day and 2 snacks per person, per day.  It worked out perfectly.  The only thing that we found to be difficult was that everyone got a dessert with every meal and we don't typically eat a dessert with every meal and it made us more full.  I felt like I was eating constantly but with all of the walking, the kids ate everything every meal!!  I say it is a good thing but my "money man" hasn't crunched the numbers yet.  The only thing to note is that you do have to pay extra for some of the table service places...like we had to pay extra at Morocco (it was a BIG meal) and I know you have to pay extra at Cinderella's castle and maybe some of the other character dining as well.  Other than that, it was great!!  You can use it for bottled water and sodas and things as well.

I want to talk about Magic Bands and Fast Passes including the new FP+ program but I think that will be a separate post.  I will do each day in a separate post as well because each day is just so jam-packed with stuff and I wouldn't want to miss telling you about anything! :)

The day we got to Disney, we did go to Magic Kingdom.  We rode Pirates of the Caribbean first. 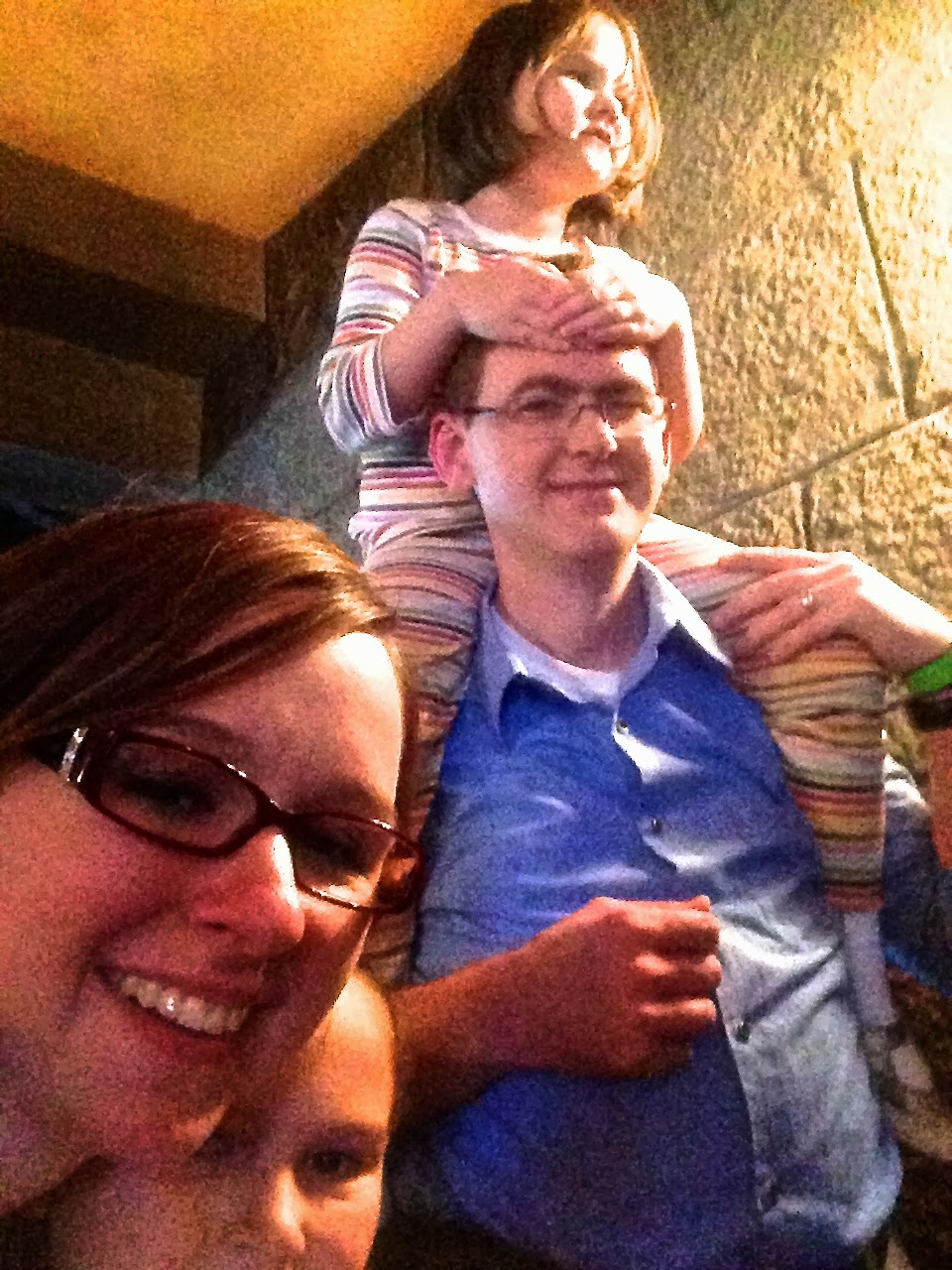 In line for Pirates of the Caribbean

We were going to start with a fairly slow and low-key ride for Lauren because she is so timid.  Well, this was NOT a good choice.  She screamed the entire time!!!  She had her head buried in my lap.  She didn't like that it was dark, or loud or that it had a little splash of water or that it had pretend gunshots and canons.  Yeah, pretty much nothing about it did she like.  FAIL!  Rachel loved it.

Next we tried Big Thunder Mountain Railroad because we thought it would be a fairly "safe" roller coaster for Lauren.  Another BIG fail!!!  If you have ever been on the ride, you know how loud it is when it is going up the track.  And there is darkness.  Again, just not a good choice.

So, from then on out, we prepared Lauren for EXACTLY what we were going on and what to expect. The rest of the week got better, I promise! 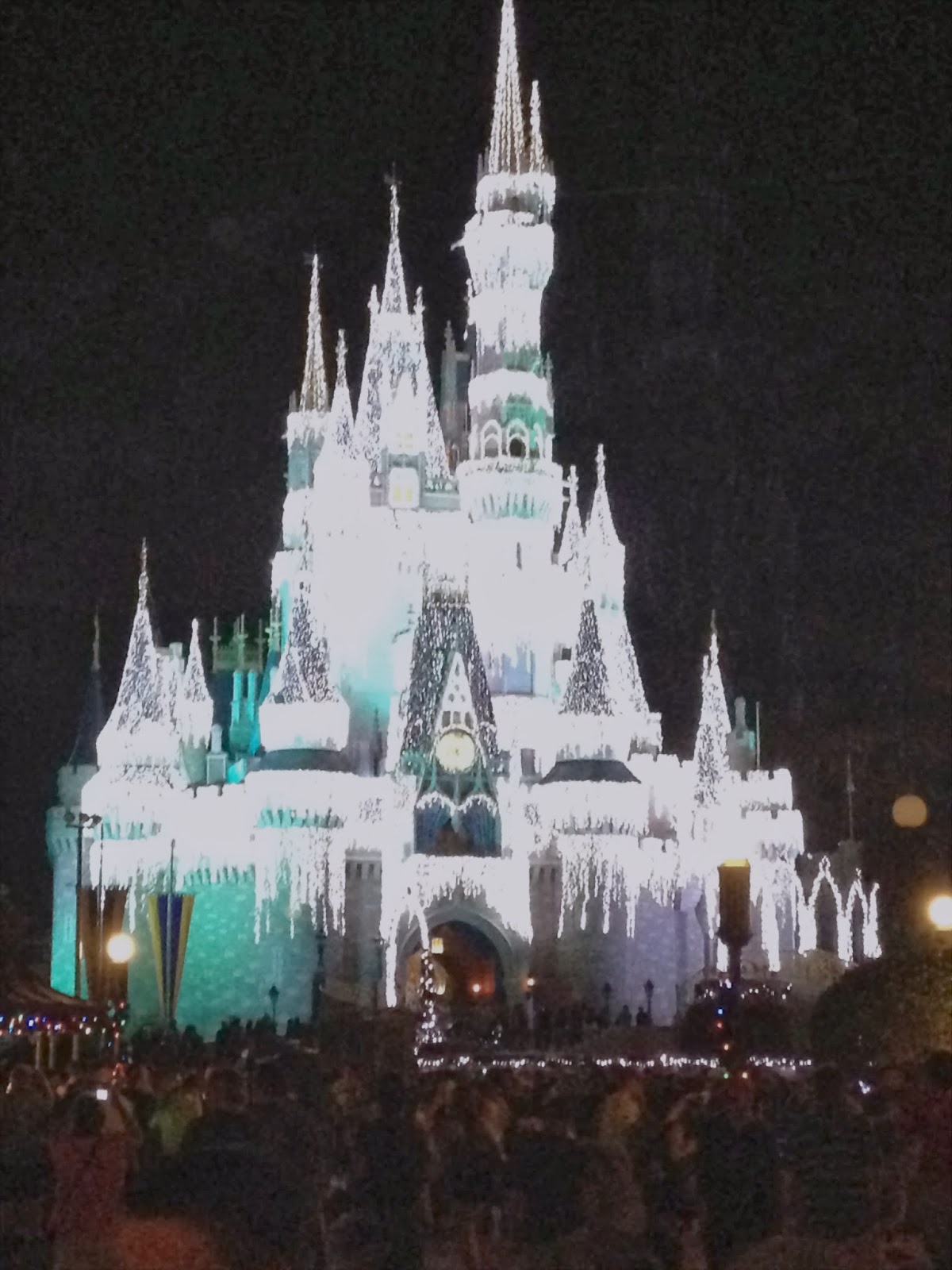