Lauren has proven to be in a little of a challenging stage.  Let's just say this: she is 3 years old!  Is that enough said?  Okay, thought so.

Now that we have established that fact, for that reason, I let her pick what theme the girls would be for Halloween this year so that she would cooperate.  We got the Chasing Fireflies catalog in the mail this year and she and I sat down and looked through it. She picked the banana costume!  I was actually shocked!!  She is just my introverted child.  She is quiet, shy, and does NOT want to be the center of attention AT ALL!  The fact that she picked the wacky banana costume was so funny to me!  She laughed and giggled and just went crazy over this banana costume.  What is so cute about Lauren is that she is a clown!  She loves making people laugh but she is just painfully shy about it.  She really is funny though.  So, we went with a fruit theme.

Rachel wanted to be a fairy. She told me from the first discussion of Halloween that she wanted to be a fairy so LUCKILY there was a fruit-themed fairy!  A watermelon fairy!!  It was also pink and involved a tutu!!  She was sold!!  And....it wasn't $200 like a lot of the costumes in that catalog so I was happy! :)

Then, there was my baby Hannah....last year, Hannah was a wee one so this was actually the first year for her to dress up in a costume.  Obviously, she needed to be a fruit but she had to be something super cute!  I found the most perfect costume for a round faced chubby bundle of cuteness....a strawberry!  The cutest strawberry costume ever!!!

So, there you have it!  My fruit basket!  Introducing the Cutest Fruit Basket in Texas: 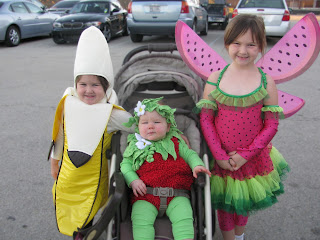 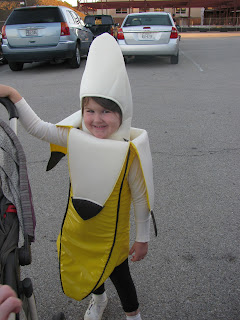 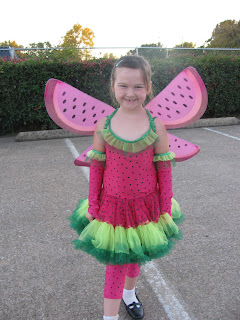 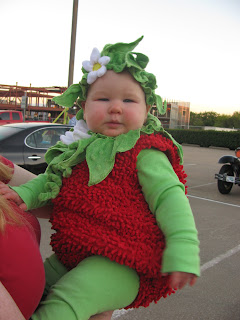