December 04, 2018
As young children and youth, many of us, even if we did not grow up in church, we heard and read about the story of Noah in the Bible.  You know, the ark, lots of rain, animals 2x2 and rainbows.  It's familiar to most people.  I have been studying the book of Genesis for awhile and there is so much more to the story than that.  Such powerful truths.

It is sometimes hard to understand in our humanness why God would destroy the earth and everyone in it.  He stated in Genesis that He was sorry that He had created man.  There is a lot of speculation with this verse but I do not believe it is because He thought He had made a mistake.  God does not make mistakes.  I believe that He was merely trying to make a statement.  He was disappointed and that is putting it lightly.  The people were wicked and ungodly.  The bottom line concerning the flood and God's wrath is this:  no one died in an unjust manner.

So, after the flood, the waters receded and Noah and his family, along with the animals got off the boat and Noah surveys the utter destruction.  The first thing Noah does is worships.  He offers a sin offering.  What an example for us to follow.

Then God alone establishes a covenant.  He promises to never again flood the earth.  This is a covenant with Noah and with the earth.  It is a covenant that is undeserved and is it is gracious.  He offers a sign - a rainbow.  When we hit a storm in our lives, we can see all of the colors of God's light.

You have to wonder if when Noah saw a cloud if he got nervous about whether or not the covenant would stand.  Noah had sin in his life just like you and me.  God said, "never again."  When God's wrath was poured out on Jesus Christ on the cross, never again would His wrath be poured out on His children.  Jesus took that for us.  It is finished.  Just like Noah, when he saw the storm cloud and panicked, he had the assurance that God would keep his covenant.  He is faithful.  It is the same with us.  We do not have to wonder if God will keep His promises.  Jesus died and God promised eternal life.  When shame creeps in and Satan tells us we aren't forgiven and that we aren't good enough, we have the promise of the cross.  He is faithful. 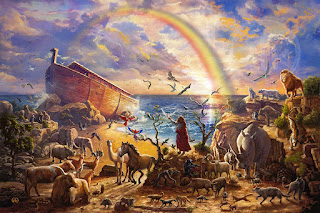